Inverness Royal Academy was founded in 1792, when it replaced the town Grammar School. The Grammar School, which since about 1668 had been located in the building now known as the Dunbar Centre, appears to have developed directly from an earlier school which began with the founding of a Dominican Priory in the Friars Street area of the town in around 1223. Thus, the Academy stands at the modern end of an educational development which reaches back over more than seven centuries.
In 1793 a Royal Charter was obtained from King George III and, as Inverness Royal Academy, the school operated on the Academy Street site until 1895, when it moved to Midmills Road in the Crown area of the town. With various additions, this building housed the Academy until August 1977 when part of the school moved to the new building at Culduthel. For two sessions it was necessary to use the buildings at both Midmills and Culduthel, but in August 1979 the school moved fully to the Culduthel site where it was located until 2016.  Construction commenced on a new building in 2014 and the new school was opened to pupils in August 2016.
In 1892, the year of the Academy’s centenary, the Rector, George Bruce, suggested that the school should have a badge. This idea was taken up and the present design eventually agreed, when the arms were matriculated with the Lord Lyon King of Arms in 1933. The Crown represents the ‘Royal’ in the title of the Academy; the cat-o-mountain is part of the Arms of Clan MacKintosh, one of whose members was a leading director of the school in its early days; the dromedary and elephant are from the Arms of Inverness, recognising the close relationship there has always been between the town and the school; the book and the burning torch indicate a place of learning.

The school’s motto ‘LABORE ET VIRTUTE’ is best translated as ‘WORK AND EXCELLENCE’.
A number of features have been incorporated from the old Academy buildings. We have War Memorial boards commemorating the former pupils and staff who served in the First and Second World Wars. These are located in the corridor outside the Theatre. Boards containing the names of the Gold Medallists (Dux) Winners from 1811 to 1972, and the Howden Medal winners for Service from 1922 to 1979 are displayed on the staircases. Up to date winners are displayed in the Theatre.
The school bell and bust of Hector Fraser are both linked with the former Grammar School. The bell, in a display case outside the Rector’s office, was gifted by him to the Grammar School in 1756. In 1793 it was moved from that school to the Academy Street site, then to the Midmills site, then on to the present building after it opened.  The bust is on display in the library. 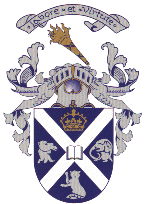